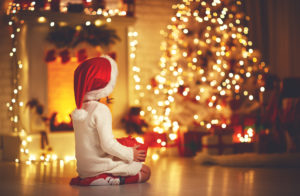 The holidays are just around the corner, and many people are making shopping plans. Let’s face it; shopping can be stressful. Things get expensive and expectations are high during “The Most Wonderful Time of the Year.” Here are some ideas to give the not-so-traditional friend or family member during the holidays. They allow both to focus on experiences rather than exchanging material goods.

1. Donate to a charity in the name of a loved one
2. Start a college or UGMA account for children or grandchildren.
3. Create a special memory – go to a play, ball game, museum, zoo, or plan a trip for later on down the road
4. Monthly membership to a club or gym
5. The gift of thought – redeemable coupons for service for your family or loved ones – babysitting, cleaning, homemade dinners, back massages, washing dishes
6. Use the money to travel to see the person for whom you would have bought a gift
7. Participate in Secret Santa like programs
8. Go cultural – pick a country and celebrate how they would from food to traditions
9. Go on vacation during the holiday season
10. Give the gift of time
11. Volunteer together – local shelters, hospitals, etc.
12. Give someone Christmas who can’t afford it – give a meal and or a gift for each of their family members
13. Date nights with your spouse

Hopefully, this gives you some ideas to help create new fulfilling memories instead of filling up the home with more things.

Finding opportunities to give back was a consistent theme among the participants at the Just for Women 2018 conference. We agree. Giving has an empowering effect on the giver, the charity that serves a need, and most importantly, on the recipients. The desire to give back is innate – not generally driven by financial benefits. Having said that, there are ways you can give that benefit both you and the charity; financially speaking. Here are two that you may want to consider.

Donation-in-kind. If you have an investment in a non-retirement account, you can donate the investment directly to a qualified charity. By doing this you completely avoid capital gains taxes. Furthermore, if you itemize your taxes, you can claim the value of the investment, on the day it was donated, as a deduction. The key benefit is that the charity receives the full value of the donation tax-free. One caveat; you must have owned the investment for at least one year and one day and it must have increased in value.

Qualified Charitable Distribution. If you have reached the wonderful age of 70½, congratulations! Uncle Sam has been waiting for this day. It is at this age that you are required to take money out of your retirement accounts; i.e. IRA, 401(k), 403(b). This is called a Required Minimum Distribution (RMD) and will occur every year going forward. If your retirement account is an IRA, you can choose to have the money you are required to take out – all or part – go directly to your favorite charity, taking advantage of the Qualified Charitable Distribution (QCD) option. The benefit to you – you do not have to claim the distribution as income or pay tax on the money that comes out. This is valuable because the distribution will not have a negative impact on your Medicare Part B premiums. The benefit to the charity – it receives the full value of your donation; tax-free.

I have the pleasure of working with the Utah Parent Center, a local charity that has served families of people with disabilities for over 35 years. I have been impressed by the positive influence they have on so many lives. While they have served more than 25,000 individuals, there are many more who could benefit from the services they provide. However, they need the support of our community to provide services to those additional people. One family’s story is below. 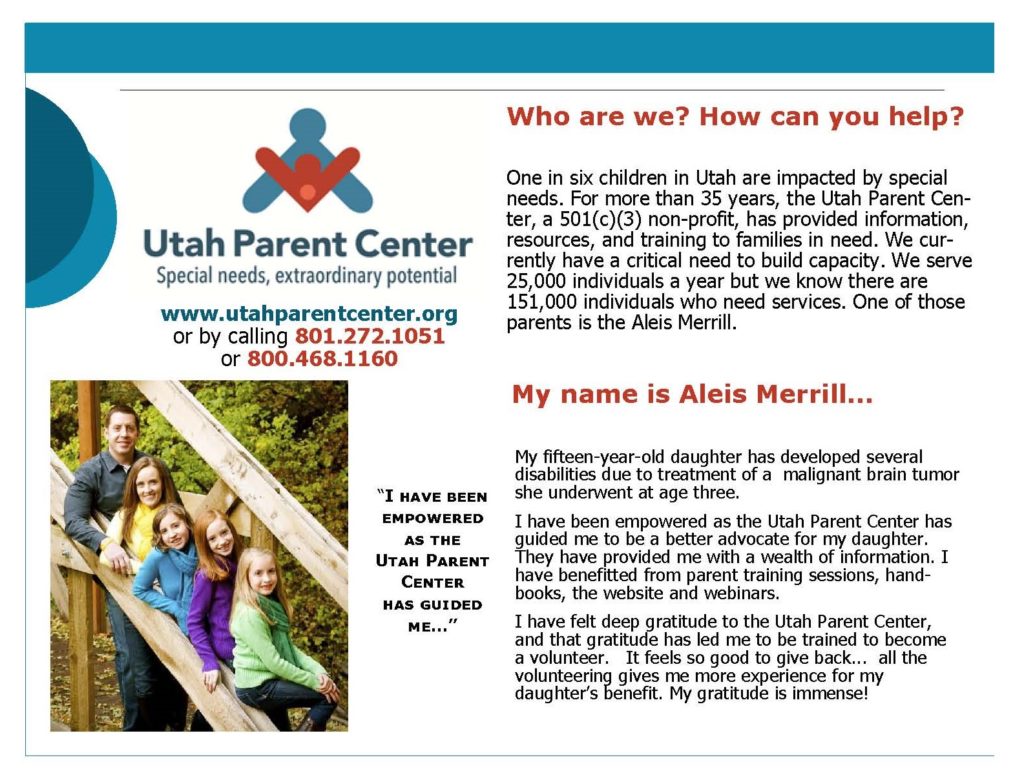 If you would like more information on making a donation-in-kind or qualified charitable distribution using your investments call our office at 801-355-8888. To donate directly to Utah Parent Center, use this link: https://utahparentcenter.org/donate/.

Together, we can make a difference.

Get Your Social Portfolio Together

When juggling work and family, your idea of retirement may be fewer responsibilities and unlimited time to do the things you want. The reality is too many people get to retirement and find that their social connections revolved around work. They lose daily connections with co-workers as well as clients and customers.

Suddenly they are out of the loop with day-to-day happenings at the office. They miss hearing from friends and lose the camaraderie of lunch conversations.

The Stanford Center on Longevity found that traditional social engagement is waning. Today’s 55-64 year olds are less engaged with family, friends, neighbors, community, and religious activities than their predecessors 20 years prior (Sightlines report). 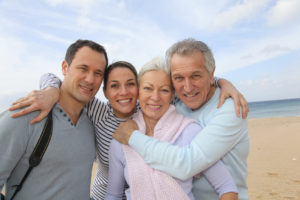 Building a social portfolio for retirement is just as important as building an investment portfolio. Meaningful relationships and participation in communities do not just happen once you retire. Building strong social connections before retirement is a key to increasing social connectivity in retirement. As a matter of fact, it is directly linked to wellbeing and a long life. The hurdle is knowing when and how to build new connections. Here are a few suggestions to get you thinking:

Family
If you value spending time with family, find ways to connect regularly. Get your family together a few times per month for a dinner. Rotate from house to house so everyone has a chance to host the group and you have the opportunity to get out of the house.

Make it a point to get together for an activity once per month. Play a game that involves family members at all age levels, or go to the pool, bowling alley, or park.
Plan a family vacation annually or bi-annually so that you can get others away from the day-to-day demands of life and create a backdrop for building memories together.

Friends
Too often we talk with friends about getting together only to find months later that nothing has happened. This is a common experience for most people. Scheduling time to get together with friends regularly may seem excessive but it’s not. Getting your activities scheduled and on the calendar increases the chances that you will actually spend time with your friends.

Your friends are also looking for ways to make connections and get out of the house. Plan regular activities, such as meeting for lunch or taking tours of the city or surrounding areas that interest your group. If you enjoy being outdoors, find a new trail to hike each week or join an off-road riding club.

Group Involvement
Volunteerism is a great way to share your time with purpose and find fulfillment in retirement. But just like relationships, it is better to look for opportunities with charities before you retire. Understanding the needs within your community or religious group will help you gauge your time and availability. The Sightlines report states that while people want to volunteer their time, they feel like they don’t have enough information or nobody asks them.

Lining up opportunities and building a social portfolio before retirement will lead to a smooth transition and more enjoyment during your golden years.

IRA Charitable Donations Are Back…and This Time They Are Here to Stay!

For those of you over age 70 ½, a very beneficial tax law is back on the books thanks to the Protecting Americans from Tax Hikes (PATH) act signed into law on December 18, 2015.

The PATH act has a provision that allows you to donate IRA money directly to a qualifying charity and avoid paying any tax on the distribution. Even better, the distribution still counts toward your Required Minimum Distribution. Officially it is called a Qualified Charitable Distribution or QCD. Those who took advantage of it in previous years will be glad it is back.

Even better, the PATH act is now permanent. In the past, Congress has only approved the measure in 1- or 2-year increments, which has made it difficult to plan for the future. 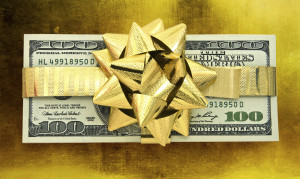 Some people have wondered what the difference is between making a QCD directly to a charity or taking the money and then donating it to the charity personally. The main difference is that a QCD does not increase your income on your tax return (AGI). This may not sound like a big deal, but the implications can be large.

To explore this in detail let’s look at an example. Let’s say Henry wants to get the money first and then donate it to a charity. If his required minimum distribution was $10,000 and he withheld $2,000 for taxes, he would get a check for $8,000. Henry would then deposit that check in his checking account and write out a personal check to the charity.

Next year Henry would get to include the $8,000 (not the full $10,000) as a deduction on his taxes. However, his income (AGI) will still be higher by $10,000, which may result in his Social Security being subject to higher taxes and/or his deductions being limited by AMT.

The other option is for Henry to donate the $10,000 directly to a charity. His income (AGI) isn’t increased and he doesn’t have to pay any taxes on the distribution. Also his charity is benefited by the full $10,000. That is an additional $2,000 to charity at no extra cost to Henry! The decision seems to be fairly easy.

If you plan to donate money to a charity and you have to take a Required Minimum Distribution, give us a call so we can help you take full advantage of this reinstated tax law.
Source: http://www.wsj.com/articles/congress-gives-americans-a-tax-gift-for-christmas-1450434600.
Smedley Financial and its advisors do not provide personal tax advice. It is important to coordinate with your tax advisor regarding your situation.