3 Myths of the Market

Every year we find reasons to question the future prosperity of America. We wonder whether investors’ prospects are dimming. Last year, our minds were occupied with government slowdowns and shutdowns. This year, we are more focused on the question, “Has the stock market come too far too fast?” While the problems are real, they should not derail us from our plans. Most difficulties are overcome and the myths of the market are not true. Keeping proper perspective will help us make better financial decisions.

Myth #1: Investing is rigged
The U.S. stock markets are the most efficient in the world. All investors have the potential to build their wealth as they participate in it. The longer we invest in a diversified portfolio, the more likely we are to have success.

There is a related question, “Is investing like gambling?” The clear answer is no. When we invest we purchase part of a company (stock) or a promissory note (bond). We become owners of these and we have rights to future cash flows that may come from them. The risks and outcomes are determined by the free market. If a company is successful then all investors that own it have the potential to benefit.

This does not mean that markets are perfect. There have always been some who try to take advantage of others. However, investors become their own worst enemies when they make poor financial decisions. Saving too little and trading too often are two of the most common mistakes. Save sufficiently and invest wisely to attain your goals. 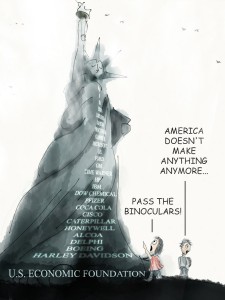 Myth #2: America is broke
The United States is in better shape now than it has been for many years. The unemployment rate is down to 6.3 percent and consumer confidence is up. Workers are expecting raises, and according to surveys of executives it looks like it may actually happen this year. Household debt is at record-low levels and corporations have more cash than ever.

Some people may argue that we don’t make anything in this country. This is false. U.S. manufacturing is up 22 percent since 2009 and near record levels. We have an abundance of natural resources, educated workers, and innovation. We have laws to protect and promote business.

Worries over ballooning government debt (over $17 trillion) are diminishing for now. The expanding U.S. economy has led to greater tax revenue (up 8 percent) and a lower deficit ($306 billion). These numbers may not sound great. We still have a long way to go to reach a surplus so we can pay off some debt, but these are the best numbers since 2007. The future appears brighter.

Myth #3: A market crash is imminent
Herbert Stein famously said, “If something cannot go on forever it will stop.” We all know that when the market stops climbing, it can be painful. Two stock-market crashes in the last 15 years are still vivid in our memories. However, just because stock prices have increased doesn’t mean a crash is coming this year.

What can we expect?
The Dow Jones index had double-digit increases in 2012 and 2013. This has happened more frequently than one might think. In the last 99 years, returns of this magnitude have occurred back to back 22 times. What happens in the year that follows two positive, double-digit years? The average return is a positive 5 percent. That would be a reasonable expectation for 2014.

When we examine critical factors for a healthy market, we see more positives than negatives right now. Of course, there are no guarantees.

The Federal Reserve Will Soon End its Easy Money Stimulus

When Lehman Brothers collapsed in 2008, all lending essential stopped. The U.S. Federal Reserve (Fed) feared that all five investment banks in this country would cease to exist. No one fully understood the financial calamity coming, but we were beginning to feel what the worst recession in 80 years would be like.

The Fed acted to stop the financial infrastructure from imploding. It believed cushioning the blow was necessary to help all Americans. It started the Troubled Asset Relief Program (TARP). It added to that program over the years with Quantitative Easing (QE) one, two, and three.

Recent years may not have felt like easy money to us, but there is likely no organization more profitable in recent years than the Fed.

The Fed doesn’t literally print money (a responsibility of the U.S. Treasury). It doesn’t have to. Money is created electronically by the Fed and infused into the financial system through open market actions. Its effectiveness is questionable. Its impact is global. And at some time soon it may be ending. 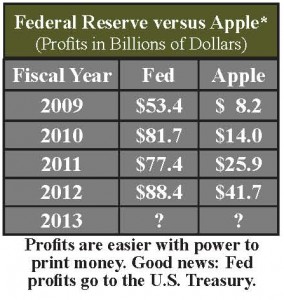 What Is the Fed’s Impact?

Currently, the Fed is spending roughly $85 billion each month to buy treasury bonds in order to keep long term interest rates at historically low levels. The goal is to encourage risk taking. The Fed wants banks to lend, businesses to hire, and consumers to borrow.

If you have purchased a home, refinanced a loan, or bought a car with debt, then you have benefited from these unprecedented efforts of the Fed.

All this money the Fed is creating seems to be working to a small degree. The U.S. stock market* is on track for its fourth positive year in the last five. If you have invested in stocks or bonds consistently during this time, you have probably benefited from the Fed’s actions. Experts have been debating how well the Fed’s historic efforts have worked. One theory is that each time the Fed spends, it has less positive impact than the previous effort. This would explain the lackluster growth in the economy.

Why Is the Fed Still Involved?

Simply stated, the benefits still appear to outweigh the risks.

Low interest rates are meant to be enablers for businesses and consumers to increase borrowing. If the debt gets out of hand, then we will be facing similar problems to those that got us into this mess.

If spending and demand increase too much, then inflation could rise to levels considered too high for a developed economy (greater than 4 percent). At that point, the Fed will have to react to try to slow down the economy even if it means job losses.

At this point, official inflation is tame and private debt levels do not appear inflated like in 2007.

As long as the risks appear low and unemployment is above 7 percent, the Fed is likely to keep spending.

What Will Happen When the Fed Slows Stimulus?

Interest rates will rise from the unusual levels where they currently are to a more natural rate determined by investors. We experienced a taste of what this will feel like this spring and summer. Rates on the 10 year treasury almost doubled in just a few months. Investors saw an increase in volatility.

Where Is the Silver Lining?

Don’t fight the Fed is a common phrase for investors. The Fed is powerful and it is working for what it believes is best for Americans. It plans to cut stimulus only after it determines that the U.S. economy is strong. If rates rise that should bring better yields for savers.

Can We Really Be Energy Independent? 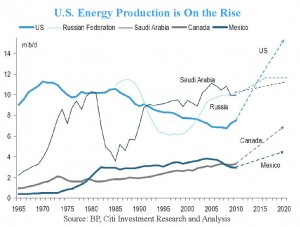 Major developments that have led to a boom in the energy industry have placed the United States on track to becoming the largest energy producer in the world, surpassing Saudi Arabia and Russia.1
In the State of the Union address, President Obama indicated that “we’re finally poised to control our own energy future.  We produce more oil at home than we have in 15 years.”2
According to a Citigroup report titled Energy 2020: Independence Day, “U.S. oil and gas production is evolving so rapidly—and demand is dropping so quickly—that in just five years the U.S. could no longer need to buy oil from any source but Canada.”
The International Energy Agency predicts that “the United States will overtake Saudi Arabia to become the world’s biggest oil producer before 2020, and will be energy independent 10 years later.”
New technologies like hydraulic-fracturing, or “fracking,” have made the extraction of oil and gas from shale rock profitable.
In Utah, towns like Vernal and Roosevelt have had an influx of workers as oil companies race to develop new oil wells. The energy boom in Utah is just a microcosm of what is happening in the nation. More energy production creates jobs, which pump money back into the economy.  It reduces our reliance on foreign countries, which allows us to control our own future.
Unfortunately, energy independence by itself may not lead to lower gas prices. Canada is completely energy independent, yet their gasoline costs about the same as ours. This is because there is a global market for oil and there is one price at which it is sold.3 We may only see a decrease in prices if the cost of oil drops globally.
Fracking also gives us access to vast natural gas reserves. Some estimates indicate we have over a 100- year supply if consumption remains at 2010 levels.4 Higher supply and lower prices are leading to more manufacturing in the United States.
Many power companies are switching to natural gas to fuel their electric plants. Natural gas burns cleaner than coal. Therefore, it is easier for power plants to meet emission standards. This abundance of natural gas has also made energy bills more palatable for cooling in the summer and heating in the winter.
The potential benefit of energy independence is not without its hurdles. Environmental concerns, limited infrastructure, and water restrictions have slowed progress. Despite these hurdles, the race towards energy independence sprints forward. Energy independence has become a reality that may improve the economy and your pocketbook.
(1) Mark Thompson, “U.S. to Become Biggest Oil Producer – IEA,” CNNMoney, 11/12/12.
(2) http://www.whitehouse.gov/the-press-office/2013/02/12/remarks-president-state-union-address.
(3) David Kestenbaum, “Energy Independence Wouldn’t Make Gasoline Any Cheaper”, NPR, 10/26/12.
(4) Gerri Willis,”What Obama Can’t Take Credit For in SOTU,” Fox Business, 1/24/12.
Tags: America, CFP®, energy, energy independent, Mikal B. Aune, Mikal B. Aune CFP®, oil, USA