The Virtuous Cycle of Rising Prices

Imagine waking up tomorrow to discover gasoline prices have dropped in half. What if milk, eggs, and all your groceries cost less as well? Suddenly, your money would be worth more. Sounds great, right? It wouldn’t take long for the heavy weight of reality to hit you.

Consider how knowledge of tomorrow’s pricing might affect today’s behavior. Assuming no shortages, we would be crazy to buy today what would cost less in 24 hours. While falling prices (deflation) sound nice on the surface, they can have disastrous consequences. 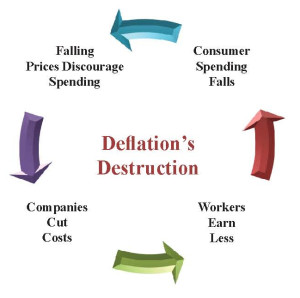 Deflation has been present in most economic depressions in history, including the Great Depression. The initial causes may include productivity increases, oversupply of goods, or scarcity of money.
A rise in productivity has been occurring for centuries with greater education and technology. In fact, a U.S. worker today, on average, can produce twice as much as a worker in 1975 and 50 percent more than a worker in 1995! Outsourcing to cheaper foreign labor has a similar effect on productivity as technology.

Supply of goods fluctuates, especially with food and energy. For example, a drought in 2012 led to a rise in grain prices like corn, which made feed cattle more expensive in 2013, which led to higher dairy and beef prices in 2014 (see Price Changes table). 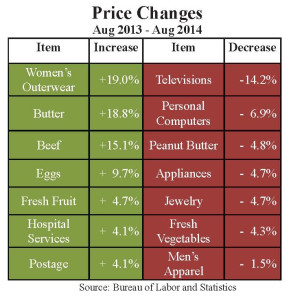 Scarcity of money is where the U.S. Federal Reserve (Fed) comes in. The Fed encourages low unemployment and low inflation by managing the money supply.

The Fed cannot control the weather in the Midwest, extract more oil from Saudi Arabia, or raise the minimum wage in China. But the Fed will do everything it can to avoid deflation. Since 2008, it has spent over three trillion dollars to stabilize falling prices.

Rising prices are normal in a healthy economy. The 50 year average for inflation is 4.1 percent. This reasonable rate encourages spending and creates a virtuous cycle of economic growth (see Inflation’s Value graphic). 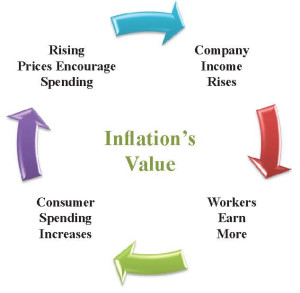 All the current numbers in this cycle are good, but below average. Over the last twelve months inflation has been 1.7 percent, wage increases averaged 2.8 percent, and consumer spending grew 3.6 percent.
The most recent U.S. growth rate showed an increase of 4.2 percent. That is a great number. If it is followed by another increase in another category like wages the growth cycle could pick up speed. The result could help the current bull market continue. 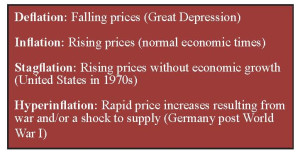