The bull market is seven years old. Global growth is anemic and corporate profits are no longer rising. These suggest that bad times are ahead, but I don’t believe it. I believe the U.S. consumer and the U.S. economy will continue to rise.

In January I made three predictions for the New Year. This month I would like to review these predictions with a special emphasis on the election—not only because I have been right (so far), but because each is helping the economy press forward. 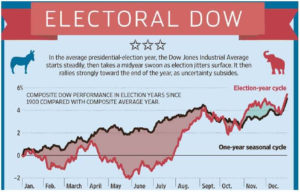 (1) The Fed will move slowly.
The Federal Reserve entered the year expecting to raise rates four times. In recognition of slow global economies, it now plans to encourage growth by keeping rates low. Moving rates up only twice this year could be better for stocks and bonds.

(2) Election years are not recession years.
Investors fear uncertainty, and election years have experienced greater fluctuations than other years. The stock market typically begins the year a little slower and then recovers before spring. Summer slowdowns occur most years, but in election years they come earlier.

Regardless of which party has a candidate in the lead, stocks typically improve as the election gets nearer. In fact, many investors are tempted to stay away until after Election Day. This simple strategy would have only delivered lost opportunity in most election years. The greatest gains actually occur in the months leading up to the election. By the way, keep an eye on the market in September and October, because a strong stock market preceding the election also appears to favor the incumbents and their parties.
I do not expect the current rally that began in February to continue without disruption. From February 11, 2016, through the end of March 2016, the S&P 500 rallied 12.6 percent. If it continued at that rate for the rest of the year, we would have a whopping 150 percent return. The market will slow down and election year history suggests this will take place in April.

Since 1927, the U.S. stock market has been positive in election years 80 percent of the time. Remember, there are no guarantees. An election year had not had a bear market loss of -20 percent anytime in the last 50 years, then came the worst presidential-election year. In 2008 the Dow lost over 38 percent. The best election year was in 1996 when the Dow gained 26 percent. Since 1900, the average has been a positive 7.3 percent.

I don’t recommend sticking our heads in the sand or placing our investment dollars on the sideline. Staying invested for the long-run is a critical part of a solid strategy.

(3) The United States will grow and the dollar will slow.
The 500 companies in the S&P 500 index receive roughly half of all their sales from overseas. So, when the dollar rises by 30 percent like it did in 2014 and 2015, it really depresses profits and makes stocks look less attractive.

The good news is that this trend has slowed down and maybe even reversed. The U.S. dollar declined in value by 4 percent in the first quarter of 2016. I view this as a positive, since we are coming off such lofty highs. The changing value of the dollar should improve U.S. growth in 2016.